Not being a TTP patient myself, I am always looking for opportunities to better learn and understand what TTP patients face on a day-to-day basis after being diagnosed with this rare blood disorder. On Thursday, April 3rd, 2014, I had my first opportunity to experience a patient receiving Apheresis.

A couple of weeks ago Sydney Kodatsky, the Answering TTP Foundation’s fearless founder and Executive Director, received the unfortunate news that she was relapsing with TTP for the 6th time. Instead of completely shutting off from the Foundation while she underwent treatment and recovery, she invited me, the Foundation’s Charitable Programs Director, to come spend the morning with her at St. Michael’s Hospital in Toronto, ON, while she received a round of plasmapheresis, so that I could see and learn, in person, what the treatment looked like for a patient and how the treatment worked. 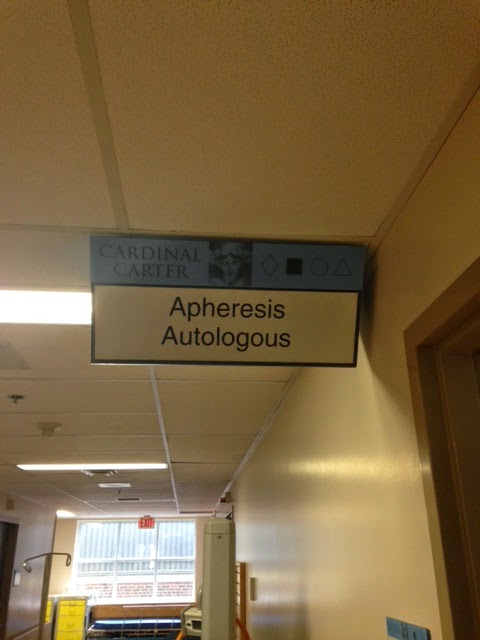 I arrived at St. Michael’s Hospital at 7:00 am; a little early for her 8:00am treatment, but I wanted to make sure I didn’t miss a moment of the experience. I headed up to the 8th floor to the Apheresis room and was able to watch the nurse set up the room and prepare the apheresis machine for treatment. I waited quietly and nervously in the hall; I can only imagine the anticipation of TTP patients as they await their treatments. To be honest, not being a TTP patient myself I had no idea what to expect Sydney to look like as she arrived for treatment. Would she look ill and drained from the relapse? Would she be in a wheelchair due to weakness? Would she have someone walk her up to treatment, just to make sure she was okay getting there? Nope - I could not have been more incorrect. Just before 8 am a bright eyed, wide smiling Sydney came bounding around the hallway corner with her medical binder and water bottle in hand, ready for her life-saving treatment. She looked like she had more energy than I did at 8:00am in the morning (I think that may be a little bit of the mother in her coming out, so used to being up early with her daughter).

We said our hello’s and headed into the Apheresis room to begin Sydney’s treatment. The nurses set Sydney up on the bed and set me up with a seat right beside the machine so that I could watch the entire procedure from preparation of her central lines (they had been inserted the week before when she first started treatment) to the very last drop of donor plasma. Now, I have watched lots of videos and seen lots of pictures of apheresis machines at work, but nothing could prepare me for how different it was being there as this machine worked its magic in real life. I don’t know any better way to explain it then being there made it all more “real”. As soon as Sydney’s lines were all hooked up, the machine was started and I have to be honest - when they turned it on it startled me a little bit. The entire room came to life, as the machine was louder than I expected as it started the life-saving procedure of spinning out Sydney’s old plasma for the new donor plasma. 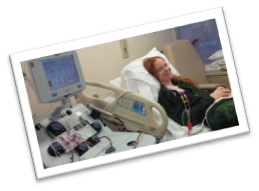 As Sydney lay in the bed receiving her treatment, her nurse Patti walked me through the process so that I could have a better understanding of what was taking place. So here is what I know now thanks to Patti.

Please keep in mind that I am not a trained medical professional and that the Foundation does not provide medical advice. The below is an explanation of the apheresis process as it was explained to me. If you have questions about the process please check with your health care provider.

So what are all the bags that hang above the machine for? 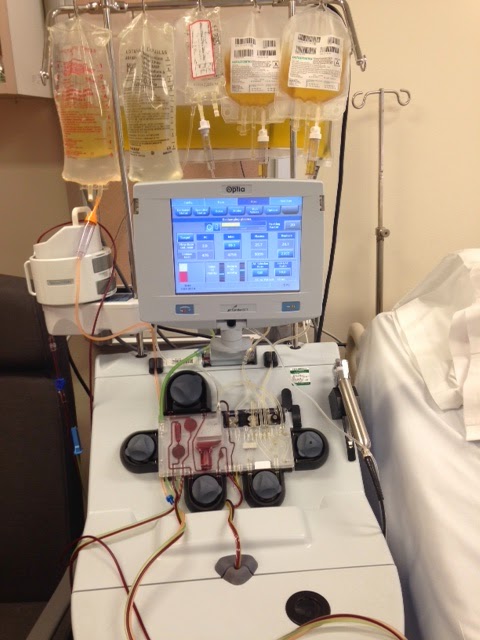 Well, from the picture to the right you can see that there were quite a few bags above Sydney’s machine. On the far left, in the front, hangs the anti-coagulant bag that ensures the blood being brought into the machine does not coagulate and gum up the machine. Next bag over (the small bag) is calcium to help reduce one of the side effects of apheresis treatment, which is muscle cramps. The last two bags on the right in the front row are the donor plasma that is being added to Sydney’s blood. What is the big bag hanging in the back? That is all of Sydney’s old plasma that is being spun out of her blood through the apheresis process.

How does the process work?

As I mentioned before, Sydney had two lines hooked up to her and the apheresis machine. Line 1 takes the blood out of Sydney and sends it into the machine where it is spun at a high volume to separate out her old plasma and add in the donor plasma. The blood then travels back into Sydney through line 2.

The whole process took roughly about 2 hours. Most of which Sydney, her nurses and I spent talking. The time flew by and before I knew it the nurse was shutting down the machine and cleaning and bandaging Sydney’s central line.  Luckily this was a very “smooth “ treatment and Sydney did not have any reactions to the plasma she was given, as many patients including Sydney during previous treatments, have experienced allergic reactions to donor plasma.

As Sydney lay in the bed relaxing after her treatment, I asked her the only burning question I could think of pretty much the entire time she had been receiving treatment - What does it feel like? She said the only way to really describe it, was that it felt like her body was humming.

All in all I was very thankful that I was able to experience this life-saving treatment in person, though unfortunately due to a TTP relapse. But this experience really helped me to better understand what the treatment is all about and gave me a better perspective of what patients go through when receiving apheresis treatment. TTP patients are really some of the strongest people in the world!

I would like to thank Sydney for giving me the opportunity to learn more about TTP and its treatment while she herself is facing a relapse.

To learn more about how you can donate blood or platelets in honor of TTP or to organize your own blood drive visit the Foundation's Blood Donation Page HERE.
Posted by Taryn Byrne at 12:13 No comments: