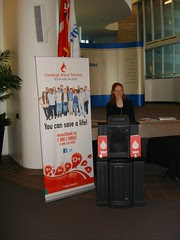 On June 7, 2012 I had the privilege to share my story in thanks to milestone blood donors, partners and volunteers at the York Region Canadian Blood Services (CBS) Honoring Our Lifeblood (HOL) event. As I looked out into the audience I knew that there was a high probability that 1 of the 600 blood donors that helped save my life was in the room. For sure some of the blood collected was used to save someone from our TTP community. 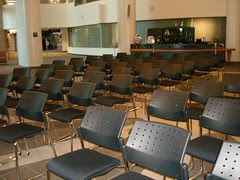 My experience with the Answering TTP Foundation's Partners for Life (PFL) program has taught me that recruiting blood donors is tough. According to the CBS PFL toolkit more than 80% of Canadians believe that there is a shortage of blood in Canada, but less than 4% of eligible Canadians donate blood. I never thought it would be hard to ask people to sacrifice an hour every 56 days to give something that can help save a life. Is it a fear of needles that scares people away? Maybe the sacrifice of time?

I only gave blood a few times before I found myself diagnosed with TTP and in desperate need of life saving blood product. Probably one of the reasons that I am so dedicated to sharing my story with TTP to raise awareness for the need for blood now, is that I feel guilt for not giving blood while I could. I simply didn't understand the impact that my gift could have had to help save a life. Now I do!

Posted by Answering TTP Foundation at 11:23 No comments:

It was anything but an ordinary Saturday night. 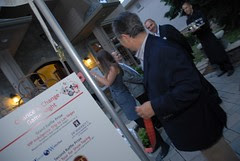 The mission was simple - to raise over $100,000 for Answering TTP (Thrombotic Thrombocytopenic Purpura) Foundation.   The ammunition was plentiful.  Poker, blackjack, and roulette tables were supplemented by and a host of exciting silent auction items including theatre tickets, pet-sitting services, and oh, yes - trips to Portugal, Las Vegas, and Casino Rama!   However, there was a snag.   The rainclouds overhead collected and threatened to spill down onto the front and back yards of the Kodatsky home, where Sydney & Alec Kodatsky have hosted the event for the past three years. 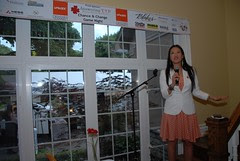 But perseverance and well-placed tents prevailed!  For the first time, the Chance & Change Game Night boasted a Master of Ceremonies, Elaine Lui, who runs her incredibly popular website laineygossip.com and, of course, is a reporter on CTV's etalk.  Better known as Lainey, she won the crowd over with her banter, humour, impersonations of a lounge singer, and sincere commitment to raising awareness of rare diseases. 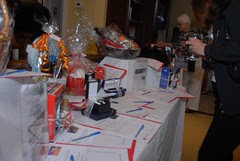 The night began, and bidding and gambling were well underway.   Lainey put her money where her mouth was, offering to donate hundreds of dollars - if anyone could beat her at Texas Hold 'Em.  Brave partygoers took her up on it (Lainey's a well-known gambling aficionado) while the rest of the group perused the bid sheets, strategizing and waiting to land the perfect jewellery, set of DVDs or basket of cookies. 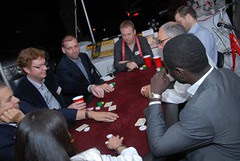 As the night grew to a close, the guests debated whether they'd preferred the mini grilled-cheeses or lamb chops that had passed their way, and prepared for their final bids -- and to see who would win the raffle draw for the ultimate prizes - including a Land Rover weekend and a Las Vegas vacation.   When the tickets had been pulled and the bids had been tallied, Chair Tammy Robertson announced the great news - we did it! Over $100,000 raised for TTP in just a few hours!  The group celebrated, Lainey happily donated $500 to the total (but didn't want to admit she'd actually lost the game - it's a matter of pride!)  and guests grooved to Way2Social as the night began to wrap up. 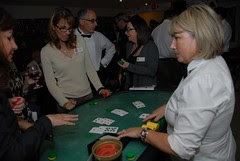 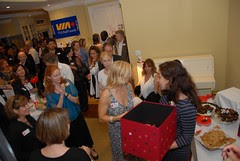 Rain? Doesn't bother us.  Huge donation goal? No sweat.  Fights over the last grilled cheese? (I can't swear to it, but I bet it happened.)   Plans for next year's Chance & Change night are already underway, and we can only go up from here.
Written by Duana Taha. 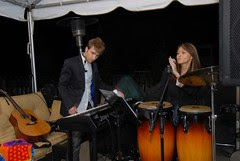 Posted by Answering TTP Foundation at 19:10 No comments: 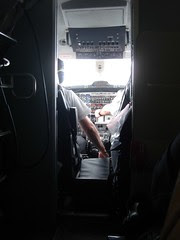 On Wednesday May 23, 2012 I found myself on a puddle jumper plane on my way to Saint John, New Brunswick.  No room for a flight attendant or a bathroom!

Shortly before 10am I arrived at the Canadian Blood Services (CBS) building in Saint John located just across the street (but down a giant slope) from the TTP treatment hospital (Saint John Regional Hospital). There I met with Michelle Thibodeau, Communications Specialist - Atlantic CBS, who helped to organize our involvement in the first Passion for Plasma blood drive and also arranged a room for a patient support group meeting to follow the same day.

Saint John is one of a few blood donation clinics that is equipped to collect blood plasma donations from donors. I was thrilled to be part of the first Passion for Plasma blood drive event to recognize plasma donors and encourage not only plasma donation but whole blood donation as well. Donations of either method result in life saving blood products required for TTP treatment. I was joined by 4 other (more local) TTP patients. Together we educated donors about TTP and encouraged participants to join the Answering TTP Foundation'sCanadian Blood Services (CBS) Partner’s for Life (PFL) team.


Joining our PFL team enables us to thank donors regularly via email communication and keep them engaged by updating them with new patient stories. Details of how to join our Partner's for Life team are available by clicking here.


This Passion for Plasma blood drive resulted in local media coverage for TTP:


The first Saint John TTP Support Group & Info Session was a wild success. Dr. Comeau (Hematologist Saint John Regional Hospital) gave an overview on TTP and answered general questions for the group. Following his presentation I shared my story to help warm the room for break out groups to enable participants to get to know each other.
To wrap up the support group, Catherine Cook bravely shared her TTP experience with TTP. Her story is uploaded to the AnsweringTTP.org website (click here). Catherine has also been an avid fundraiser even while in recovery. She has knitted booties, dish clothes and cup warmers to contribute funds to benefit Answering TTP Foundation. With each sale she includes information about TTP to help raise awareness.
Many thanks to Arlene, local Apheresis nurse, for her support in organizing this successful support session. The group is already looking forward to another meeting next year. In the fall, the group plans to participate in the fall Walk to Answer TTP Together (click here to register today!).

Posted by Answering TTP Foundation at 11:41 No comments:

On Tuesday May 22, 2012 I took an early morning flight to kick off the Maritime Roadshow in Halifax.  It was to be a packed day. I met with Answering TTP Community members for a lunch support meeting, medical staff in the early afternoon, and then I travelled to Kentville for a CBS Honoring Our Lifeblood (HOL) event that evening.

I met Teela, Teela's mom and Mark at Mexicali Rosas around the corner from the local Halifax TTP treatment centre (QEII) for lunch. Over nachos and salad we shared our TTP experiences. Both Teela and Mark have shared their stories at AnsweringTTP.org and they both recognize the value of local TTP support groups. With their help we will be developing a local Halifax TTP support group.

After lunch Mark generously volunteered to accompany me to the TTP treatment room at QEII. We met with a couple of the ever-friendly Apheresis staff and I gave them some of our New Patient Brochures to ensure that they had adequate supply to distribute to newly diagnosed patients. This piece provides new patients and their supporters an easy-to-understand description of TTP and information about accessing Answering TTP Foundation's support programs.
After killing some time at a local coffee house, Mark and I headed to my previously arranged meeting with Dr. Sue Robinson who treats some of the Halifax TTP patients. We met in a room in the Bathune building of the hospital  - perfect for the first TTP support group session. Dr. Robinson was enthusiastic about Answering TTP initiatives and agreed to help us organize the first Halifax TTP support group session. She also committed to distributing the brochure for medical professionals to the other hematologists treating or having an interest in TTP research.

Next Mark and I travelled with Paul Doucet, Communications Specialist - Atlantic Region CBS, to Kentville for their annual HOL event. Mark did a fantastic job sharing his story in thanks to blood donors receiving awards for reaching 50, 100 and 150 threshold blood donations. Mark has agreed to work with CBS in the future to help engage new donors and raise awareness for TTP in the Halifax area. Below is a photo of myself, Mark and a blood donating duo who together have donated over 150 units of blood for those in need. Mark and I were honoured to meet and talk to them about why they donate.
Written by Sydney Kodatsky.
Posted by Answering TTP Foundation at 15:33 1 comment: